Skip to main content
Help us make this documentation better. Edit on github..

OpenPype is using pyblish for the publishing process. OpenPype extends and modifies its few functions a bit, mainly for reports and UI purposes. The main differences are that OpenPype's publish UI allows to enable/disable instances or plugins during Creating part instead of in the publishing part and has limited plugin actions only for failed validation plugins.

Concept of Creating does not have to "create" anything yet, but prepare and store metadata about an "instance" (becomes a subset after the publish process). Created instance always has family which defines what kind of data will be published, the best example is workfile family. Storing of metadata is host specific and may be even a Creator plugin specific. Most hosts are storing metadata into a workfile (Maya scene, Nuke script, etc.) to an item or a node the same way as regular Pyblish instances, so consistency of host implementation is kept, but some features may require a different approach that is the reason why it is creator plugin responsibility. Storing the metadata to the workfile persists values, so the artist does not have to create and set what should be published and how over and over.

Objected representation of created instance metadata defined by class CreatedInstance. Has access to CreateContext and BaseCreator that initialized the object. Is a dictionary-like object with few immutable keys (marked with start * in table). The immutable keys are set by the creator plugin or create context on initialization and their values can't change. Instance can have more arbitrary data, for example ids of nodes in scene but keep in mind that some keys are reserved.

Task should not be required until the subset name template expects it.

object of CreatedInstance has method data_to_store which returns a dictionary that can be parsed to a json string. This method will return all data related to the instance so it can be re-created using CreatedInstance.from_existing(data).

Controller and wrapper around Creating is CreateContext which cares about loading of plugins needed for Creating. And validates required functions in host implementation.

Context discovers creator and publish plugins. Trigger collections of existing instances on creators and trigger Creating itself. Also it keeps in mind instance objects by their ids.

Creator plugins can call creator_adds_instance or creator_removed_instance to add/remove instances but these methods are not meant to be called directly out of the creator. The reason is that it is the creator's responsibility to remove metadata or decide if it should remove the instance.

Host implementation must implement get_context_data and update_context_data. These two functions are needed to store metadata that are not related to any instance but are needed for Creating and publishing process. Right now only data about enabled/disabled optional publish plugins is stored there. When data is not stored and loaded properly, reset of publishing will cause that they will be set to default value. Context data also parsed to json string similarly as instance data.

There are also few optional functions. For UI purposes it is possible to implement get_context_title which can return a string shown in UI as a title. Output string may contain html tags. It is recommended to return context path (it will be created function this purposes) in this order "{project name}/{asset hierarchy}/<b>{asset name}</b>/{task name}".

Another optional function is get_current_context. This function is handy in hosts where it is possible to open multiple workfiles in one process so using global context variables is not relevant because artists can switch between opened workfiles without being acknowledged. When a function is not implemented or won't return the right keys the global context is used.

Main responsibility of create plugin is to create, update, collect and remove instance metadata and propagate changes to create context. Has access to CreateContext (self.create_context) that discovered the plugin so has also access to other creators and instances. Create plugins have a lot of responsibility so it is recommended to implement common code per host.

Base implementation of creator plugin. It is not recommended to use this class as base for production plugins but rather use one of HiddenCreator, AutoCreator and Creator variants.

When host implementation use universal way how to store and load instances you should implement host specific creator plugin base class with implemented collect_instances, update_instances and remove_instances.

Creator which is not showed in UI so artist can't trigger it directly but is available for other creators. This creator is primarily meant for cases when creation should create different types of instances. For example during editorial publishing where input is single edl file but should create 2 or more kind of instances each with different family, attributes and abilities. Arguments for creation were limited to instance_data and source_data. Data of instance_data should follow what is sent to other creators and source_data can be used to send custom data defined by main creator. It is expected that HiddenCreator has specific main or "parent" creator.

Creator that is triggered on reset of create context. Can be used for families that are expected to be created automatically without artist interaction (e.g. workfile). Method create is triggered after collecting all creators.

AutoCreator has implemented remove_instances to do nothing as removing of auto created instances would lead to creating new instance immediately or on refresh.

Implementation of creator plugin that is triggered manually by the artist in UI (or by code). Has extended options for UI purposes than AutoCreator and create method expect more arguments.

OpenPype define few specific exceptions that should be used in publish plugins.

Extended version is PublishXmlValidationError which uses xml files with stored descriptions. This helps to avoid having huge markdown texts inside code. The exception has 4 arguments:

Where and how to create xml file

Xml files for PublishXmlValidationError must be located in ./help subfolder next to the plugin and the filename must match the filename of the plugin.

Xml file content has <root> node which may contain any amount of <error> nodes, but each of them must have id attribute with unique value. That is then used for key. Each error must have <title> and <description> and <detail>. Text content may contain python formatting keys that can be filled when an exception is raised.

When there is a known error that can't be fixed by the user (e.g. can't connect to deadline service, etc.) KnownPublishError should be raised. The only difference is that its message is shown in UI to the artist otherwise a neutral message without context is shown.

Publish plugins can be extended by additional logic when inheriting from OpenPypePyblishPluginMixin which can be used as mixin (additional inheritance of class). Publish plugins that inherit from this mixin can define attributes that will be shown in CreatedInstance. One of the most important usages is to be able turn on/off optional plugins.

Attributes are defined by the return value of get_attribute_defs method. Attribute definitions are for families defined in plugin's families attribute if it's instance plugin or for whole context if it's context plugin. To convert existing values (or to remove legacy values) can be re-implemented convert_attribute_values. Default implementation just converts the values to right types.

:::Important Values of publish attributes from created instance are never removed automatically so implementing this method is the best way to remove legacy data or convert them to new data structure. :::

Possible attribute definitions can be found in openpype/pipeline/lib/attribute_definitions.py.

Main window of publisher shows instances and their values, collected by creators. 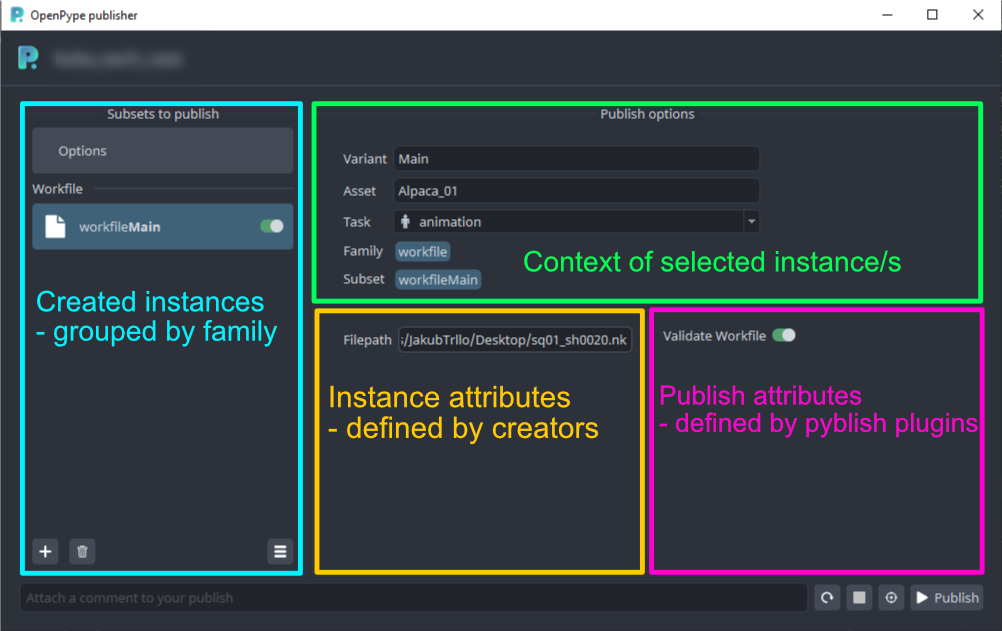 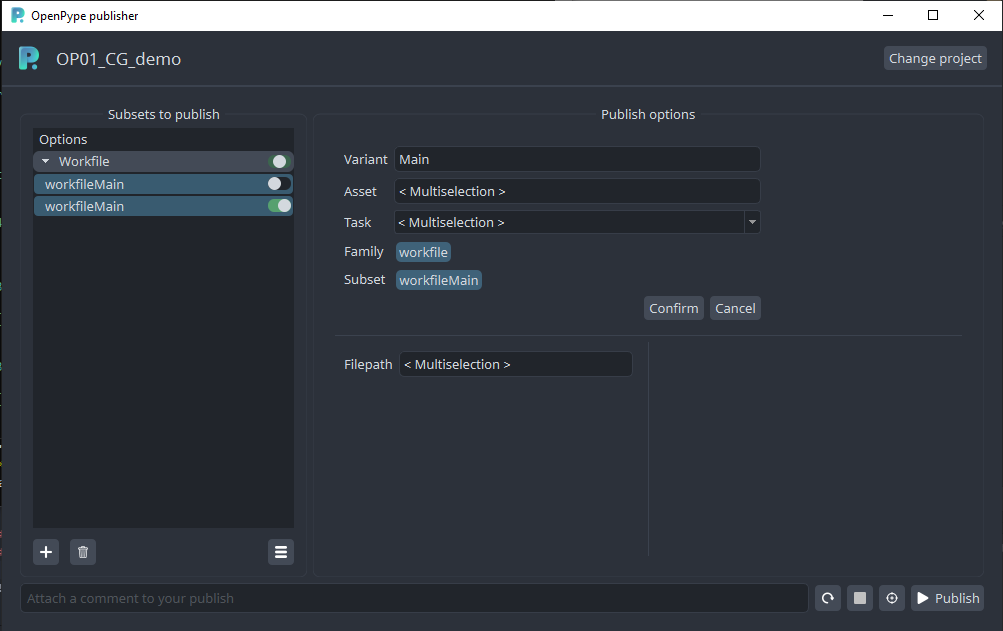 List of instances always contains an Options item which is used to show attributes of context plugins. Values from the item are saved and loaded using host implementation get_context_data and update_context_data. Instances are grouped by family and can be shown in card view (single selection) or list view (multi selection).

It is possible to change variant or asset and task context of instances at the top part but all changes there must be confirmed. Confirmation will trigger recalculation of subset names and all new data are stored to instances. 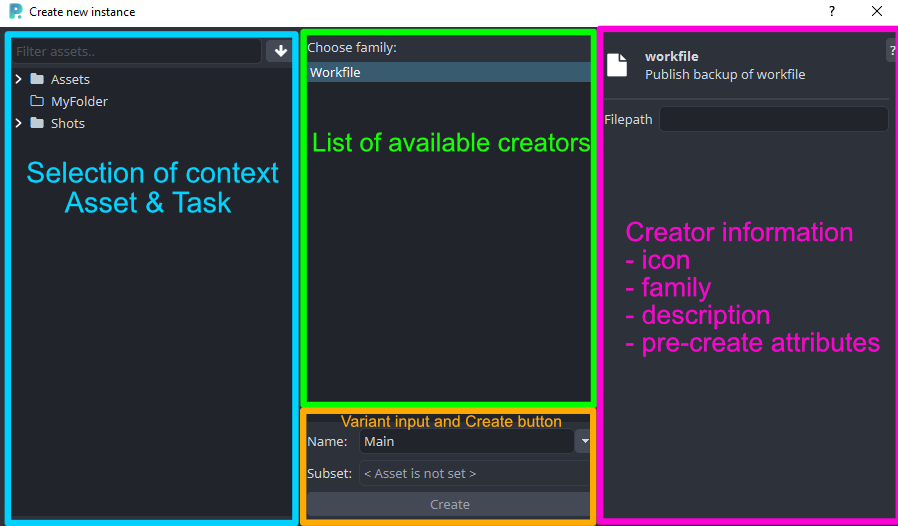 Create dialog is used by artist to create new instances in a context. The context selection can be enabled/disabled by changing create_allow_context_change on creator plugin. In the middle part the artist selects what will be created and what variant it is. On the right side is information about the selected creator and its pre-create attributes. There is also a question mark button which extends the window and displays more detailed information about the creator.